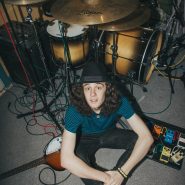 An Irish singer/songwriter; Dylan's eclectic taste in music makes his sound one that is very hard to pigeon hole. Drawing influence from great songwriters such as Paul McCartney, Lindsey Buckingham, Steve Earle and Tom Petty, his songs are lively and melodious and certainly pack a punch. Combining clever melodies and a strong affection for the craft of songwriting, Dylan's songs are sure to stand the test of time.
He earned his stripes busking on the streets of Dublin from a very young age, winning busking competitions throughout the country, most notably his category in the Banbridge BuskFest 2012 and the Arklow busking competition 2012. For the past few years, Dylan has honed in on his guitar and songwriting skills and is currently in the studio preparing more releases for later in 2020.