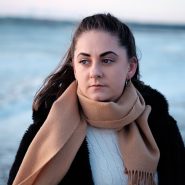 Roisin is a singer/songwriter from Cork. Signed to London-based record label, Complete Opposite Records, her world has revolved around music since the age of 5 when she first began to learn the violin. After that, she took up the piano, the bodhrán, the guitar, the céilí drums and the ukuele. It wasn't until she was 15 years old that she began singing, started a YouTube channel posting various covers that she did. Roisin’s debut single 'Get Up' was released on May 17th 2019, followed by her latest release, 'All The Lights' on November 29th 2019. Her music is available on Spotify!