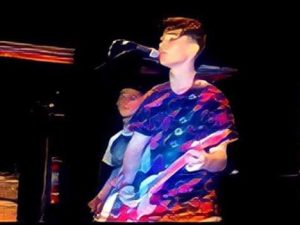 Inhaler have been selected to be included on this very special compilation album, which features 16 of the most striking artists from the previous 12 months of The Garage Gigs.

In the past we have worked with The Script, Kodaline, Ham Sandwich, Ryan Sheridan, Royseven, Delorentos, and many more, but this is the first time we have ever released a compilation album of our artists.

How it works:
Initially this album will only be available in physical format (ie CD). This is to encourage the fans, friends and families of the artists involved to get behind them and support them. After this initial period, and with your support, we will have the resources to launch a full digital release across all online formats, boosting the artists profiles significantly.
Using our unique approach, you also get to have a nice shiny new CD to hold forever.

Surely this is going backwards?
Quite the opposite. Despite the move towards online availability of music, we at Garageland are a very pragmatic bunch, and we understand that while any artist can put their music up online, a much stronger impact can be created with some financial resources behind them. We understand that quite modest CD sales can generate capital to enable us to access and leverage the online tools effectively on behalf of our artists, whereas trying to generate capital from online sales is virtually impossible at these early stages. So many artists ‘throw their stuff’ up online, only to watch it be ignored or disappear. That’s disheartening. We don’t believe in ‘throwing stuff’ anywhere. So let’s aim properly, and access some higher goals, using self generated resources.

The following is a set of defined targets to help you, the supporter of the artist, to get behind the project.

Target 1: 20 – 40 Album Sales – increased engagement in extra PR for the artists campaign specifically, this will include Facebook ads and boosts.

Target 3: 60 + Album Sales – Artist will receive 15% payment directly (more cash, more real money) plus Full digital distribution across all online outlets including Spotify, Deezer, Apple Music, Google Play, iTunes and many many more. This will have the effect of dramatically increasing the artists visibility in a highly competitive market place.

Target 4: 100 + Album Sales – On hitting this target, we will create a specific marketing campaign around the individual artist (value €1,000), effectively creating a ‘single release’ for the specific song.

It is not guaranteed that all artists from the initial physical release will be included on the digital release, as this will be determined by the artists own efforts and the efforts of you, their fans, family and friends.