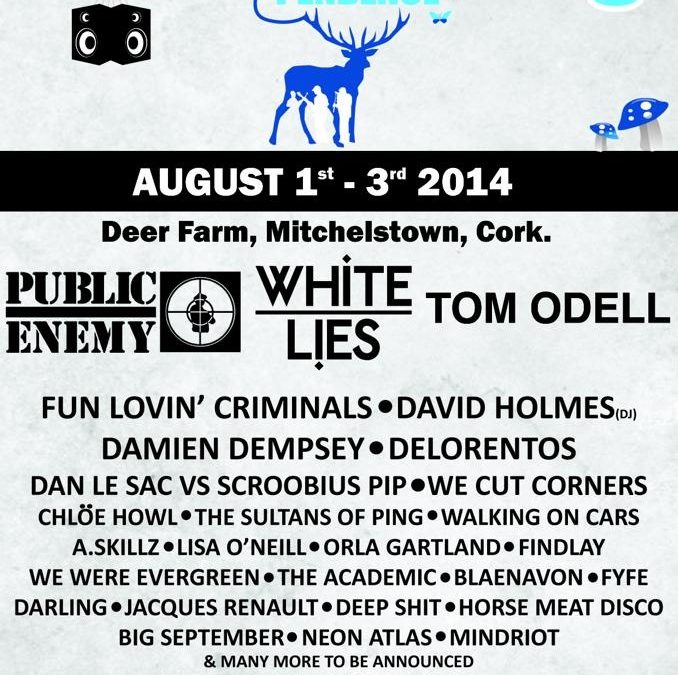 INDIEPENDENCE Music & Arts Festival returns this August Bank Holiday Weekend with a stellar line-up of fantastic international and Irish acts. It’s Indie’s fifth anniversary at Deer Farm, Mitchelstown and after last year’s sell out festival, organisers have managed to keep ticket prices at their affordable best while attracting some of the best names around.

US hip hop legends PUBLIC ENEMY will bring the noise as they top the INDIE14 bill and are joined by fellow headliners TOM ODELL, WHITE LIES and FUN LOVIN’ CRIMINALS.

Over the years INDIEPENDENCE has been a huge supporter of excellent Irish music and INDIE14 is set to welcome award-winning artists such as DELORENTOS, DAMIEN DEMPSEY and a DJ set from DAVID HOLMES, alongside Leeside legends THE SULTANS OF PING and emerging stars like LISA O’NEILL, THE ACADEMIC, WE CUT CORNERS, ORLA GARTLAND and WALKING ON CARS.

INDIE14 will also welcome back festival favourites DAN LE SAC VS SCROOBIUS PIP, while introducing one of the BBC’s Sounds of 2014, Chlöe Howl and London folktronica artist FYFE. Also returning is the dance-tastic BACARDI ARENA which will feature artists such as A-SKILLZ, JACQUES RENAULT, DEEP SHIT and HORSE MEAT DISCO as well as a wealth of Irish talent to be announced.

Following the success of last year’s indoor arena (where even the Gardai had a dance!),THE BIER HALLE returns with it’s selection of bars and great live music over the three days. INDIE14 will also bring back its SPOKEN WORD and COMEDY STAGES along with the HOT PRESS HOT SPOT and live broadcasts on site from TODAY FM.

There’s lots more to announce in the coming weeks, but in the meantime tickets are on sale from 9am on Friday March 21st priced at just €99 for weekend camping. Stay tuned towww.facebook.com/INDIEPENDENCEFEST for regular festival updates and ticket giveaways!